What would happen if the Muslims from India suddenly vanished? A thought worth prodding over and why not! (Depending on which side you are, if you firstly believe in taking sides). But probably we will fall short of its true ramifications because most of us have very little knowledge of history. Oh yes, sweeping sentiments and statements are aplenty. However, most of us (with or without sides) acknowledge and know for a fact that Indians built and continue to build India. And that Indians include apart from others, Hindus and Muslims.

Yet, not all the nuances of the past are known with exceptional and factual clarity. And to throw light on the shadowed side of the history books, the fictional thought of all Muslims vanishing all of the sudden plays out in ‘The Muslim Vanishes’, a play by renowned journalist Saeed Naqvi. Curiosity, intrigue, and a roller-coaster ride over facts, fiction, and opinions, this play is more than a mere thriller, it is an engrossing gaze over the past and present, a satire that enlightens, educates, and gives more than one reason to prod over ‘what would happen if the Muslims from India suddenly vanish?’

Saeed Naqvi needs no introduction. A senior Indian journalist, television commentator, he has interviewed world personalities and traveled to 110 countries in pursuit of fair journalism. However, as pointed out by him, it was interesting to know his background. Born in a village called Mustafabad in UP, his family chose to stay in India and like many other Muslims believed the British to be the common enemy. Going to an English-medium school was considered a compromise, as they were proud of their own language Urdu.

Throughout his career, he was helped and indulged by friends who were primarily Hindus, for there were not many Muslims in elevated positions and if there were, they did not want to compromise on their secularism by helping another Muslim. An unequivocal champion of Indian secularism that protects, among a billion others, the world’s second-largest Muslim population, Saeed Naqvi is saddened today by how much the country has changed. What worked a couple of decades back and what has changed since? Why would an experienced and itinerant journalist study theater to sit and write a satirical play? To know one has to read the play. However, for its glimpses, we got into a conversation with the man himself, Saeed Naqvi, who talks about his play ‘The Muslim Vanishes’, the huge repository and dynamics of the Hindu-Muslim engagement in the country, and the hope the future generation brings. 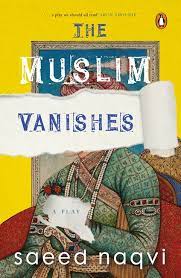 There is an explicit view in Hindutva ideology that Muslims slow the growth of India and make India backward. How do you address this in your play?

Saeed Naqvi: This is elucidated in the play. But the PM in his very first speech in Parliament said we have to shed 1200 saal ki gulaami, or 1200 years of subjugation. I would say why 1200, let’s go back further when the first mosque in India was built and the Prophet of Islam was still alive. A mosque in Kerala, the Cheramaan Juma Mosque was built on lands given by a Hindu nobleman Cheramaan Perumal. From pre-Islamic days, there was trade in spices, etc,. and Muslim traders kept coming. Had electoral politics been there in those days, polarization would have begun then and there. Over the years, many people felt that the Muslims made India their home. And they adored the country, including facts such as that there is more poetry on Ram and Krishna been written by Muslims than by Hindi poets! So a multi-cultural, multi-lingual, multi-ethnic society along with electoral politics together creates a bit of the problem. Even if you see, in 1857, the Hindu Battalion from Meerut came and asked Bahadur Shah Zafar to lead them against the British. It was the secularism of a joint effort, a combined aim, not the secularism that we adopt today where we barely tolerate each other. The Hindus and Muslims don’t hate each other; if they did there would be massacres down the line in the thousands of years. But unfortunately, history is cherry-picked.

Ghalib the great poet was going to Kolkata to recover his pension, he stopped his boat in Varanasi and he couldn’t move from there, he adored it. He wrote his longest poem in Persian on Varanasi. Shaikh Ali Hazi made his home in Banaras because every Brahmin in the city looked like the son of Ram and Laxman to him.  Bismillah Khan played his shehnai in the Kashi Vishwanath Temple. There are lakhs of such examples and yet when the PM opened the Kashi Corridor, all he remembered was Aurangzeb. Is that all the history of the place? Communalism and hatred have been manufactured as a political need.

Could you please dissect the idea of how those who push the agenda of polarization and the Muslim-Hindu divide benefit from this narrative?

Saeed Naqvi: Again this is a political construct. Communalism has political patrons, and casteism is an ancient habit and a custom. MN Srinivas, a famous sociologist, wrote, “What is Hinduism without caste?” When caste begins to wobble, I call it the problem of the two interlocking triangles. The first triangle is the caste pyramid with the Brahmin at the top and it becomes wider to the lowest caste. The Muslim is an outcast, he is not in this system. Now, this triangle of caste is exposed to western notions of equity, social justice, upward mobility, etc. But if you happen to be caste X, your son and his son will have to be caste X, you can’t move up the caste ladder. You have to be born into a caste and there is no upward mobility. VP Singh used the Mandal Report to bring the lower caste and OBCs into his political fold. When he did that, what did the BJP do? They had to consolidate the caste structure, otherwise, they would lose power and the structure would go away. And so they launched the Rath Yatra. That was the beginning of the spiral. The Muslim is the enemy and for communalism to win politically, it has to be tied to nationalism and therefore Pakistan comes in.  That’s the second triangle. Delhi-Srinagar is one line of the triangle, India-Pakistan the other, and the third is Hindu-Muslim. These are all one complex of issues. So while the tension with Pakistan continues, Kashmir will never get resolved, Hindu-Muslim tensions will remain. But once you have understood that then relations with Pakistan have got to improve, and they will improve because no country can live with an enemy as a neighbor eternally. This is a political construct so that Hindu consolidation takes place. It can never take place even otherwise because each state and region is different.  In fact, communalism instead of helping compose is keeping the current government in power by a delusion. It is not helping caste, it is aggravating casteism. One seeds the other. It’s all very complex and you will have to read the play. 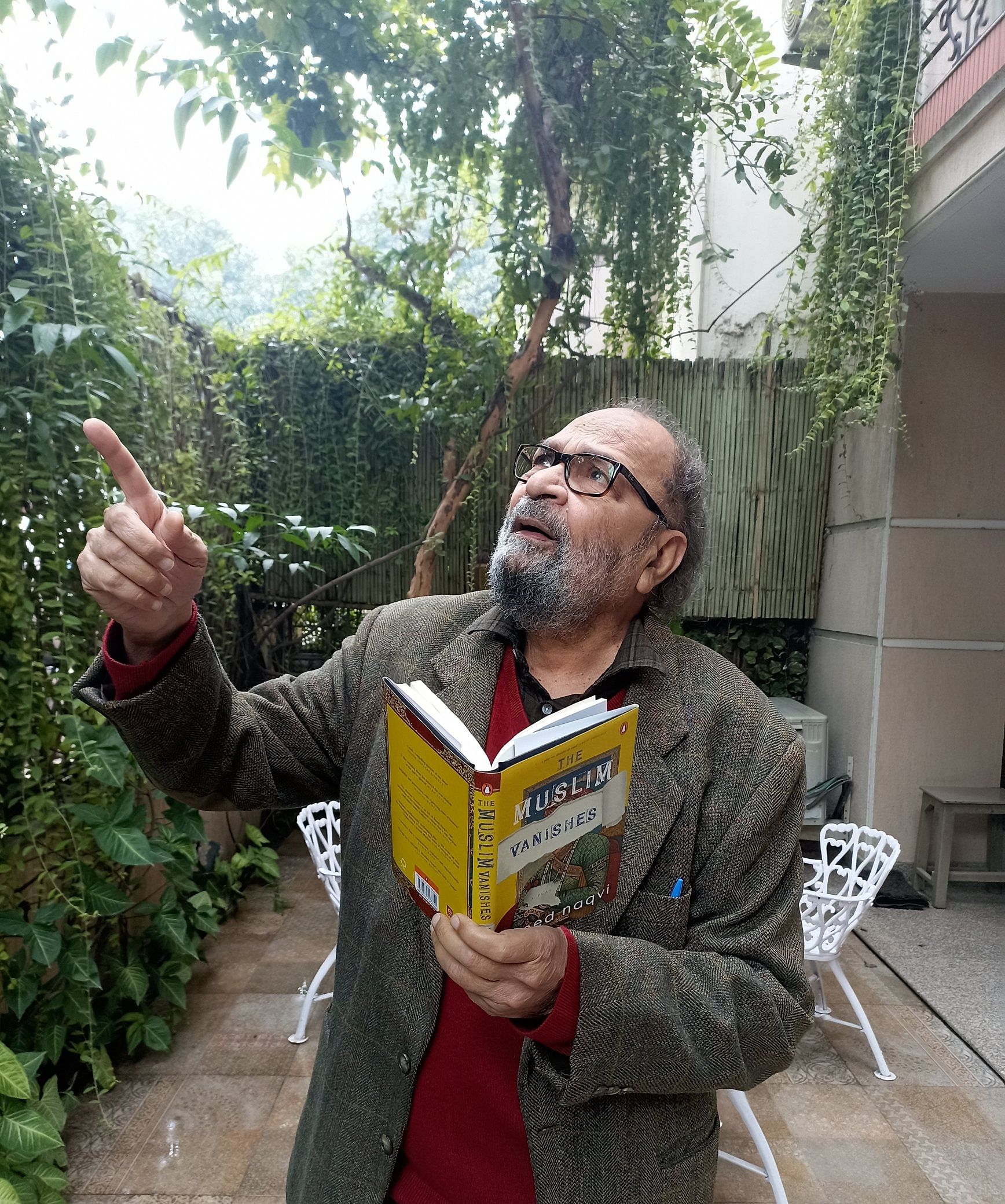 The play is a mix of history and fantasy. What historic arguments do you bring forward in your play to show that Indian Culture is a uniform mix of many influences, including the huge chunk of the Muslim art, traditions, and culture, and this is what makes India that prides itself in diversity?

Saeed Naqvi: The play starts when one day two TV channel anchors are given a slip of paper with strange news. It says all the country’s Muslims have vanished. It is like pulling out zillions of gallons of water from the ocean. There is a scene in the play: The Shankarlal Music Festival is on and they say Bhimsen Joshi cannot come for tonight’s performance. Why? Because Latif Ahmed, his tabla player, has disappeared. He was going to sing Miya Malhar created by Miya Tansen. The words were written by Muhammad Shah Rangeela. The bandishes, compositions are by Adarang Sadarang. Adarang and Sadarang were an uncle-nephew team and were the major composers of all that we are signing today as Khayal bandish. In the play, Farsi is the court language and so the judge starts to strut. Everything has been created by the Hindus and Muslims together.

Even if you see outside the play, during the Puri Rath Yatra of Jagannath, the chariot stops at the house of Salabeg, whose father was a Muslim, because all the songs are written by him. The best singer of his songs was Sikandar Alam and his daughter to this day keeps up the tradition. The most popular bhajans in the last 70 years, such as Man Tarpat Hari Darshan Ko was composed by music director Naushad, sung by Mohammed Rafi and written by Shakeel Badayuni. There is no end to it, you think of food, marriage customs, all of which are taken from each other.

The book is fresh and just out of print and bravely addresses the elephant in the room. What reactions do you expect?

Saeed Naqvi: People will be shocked. Some who don’t read it may be tempted to throw stones, but those who have read it will be astonished. As my friend Meghnad Desai said people will have to unlearn so much while reading this play.

Our Constitution proclaims equality and fraternity that often sounds like a far cry from the realities we live in today. How deep is the damage done to the belief in brotherhood and being Indian before all other labels? Can we still undo it?

Saeed Naqvi: The damage is deep but it is not irreparable. We are also emotional people. Some years ago Kabir Khan made Bajrangi Bhaijaan and that film galvanized the atmosphere in Pakistan and India. This works. Media is the key, but now it is controlled too and this is part of the crony capitalism. It helps keep the media completely riveted on the government or on one solitary opposition party so that national opposition can never get together.

With the current political disposition of parties, it seems no one dares to bring in the conversation that we live in an intolerant India. What change in the political opposition does India need today to have a fair political discourse?

Saeed Naqvi: Don’t call it communism; don’t call it socialism or Left-wing. Vote for a government that works for the poorest and doesn’t create a big divide between the rich and poor. Remove the labels because we want the leaders to work for the people so as to bring education to them, universal healthcare, housing, employment, and yes, we need a private sector for growth but not monopolies.

We see the Indian Youth becoming involved in such disgraceful acts as ‘Bulli Bai’ and ‘Sulli Deals’. Do they represent the majority or it is a radicalized bunch? Your parting words on if tomorrow’s India will be a better place for the minorities?

Saeed Naqvi: In a country like India you can’t generalize. These disgraceful acts have happened in one enclave but you go to universities and colleges and you find very enlightened youngsters. I think the future of India is not as bleak as it is being made out to be. For tomorrow’s India, I can say that the water has been muddied but the water can be cleared. Like the Ganga which at the moment is not clear but if you give it gati, if you give it a good flow it will be cleaned.

She Survived Cancer—and Then Had to Battle Iatrogenic Fistula

6 Cliché Statements That Have Been Used to Brainwash The Girl-Child!

Our Editor’s Honest Review of The Five-Minute Journal