The pen is mightier than the sword. In our times, we can probably replace the ‘pen’ with the ‘a digital device’. Either way, writing and communicating remains the surest and most effective way to bring about change. And one such organization that is a shining example of this belief is Khabar Lahariya.

Established in 2002, Khabar Lahariya, India’s only women-led brand of ethical and independent rural news, today is a popular newspaper published in different rural Hindi dialects. With editions across Uttar Pradesh, this publication is run entirely by women of the region, who belong to the SC, ST, Dalit, or Muslim communities.

With many accolades under its belt, Khabar Lahariya has recently been in the limelight when the Indian documentary called ‘Writing With Fire’ claimed the Oscar nomination. 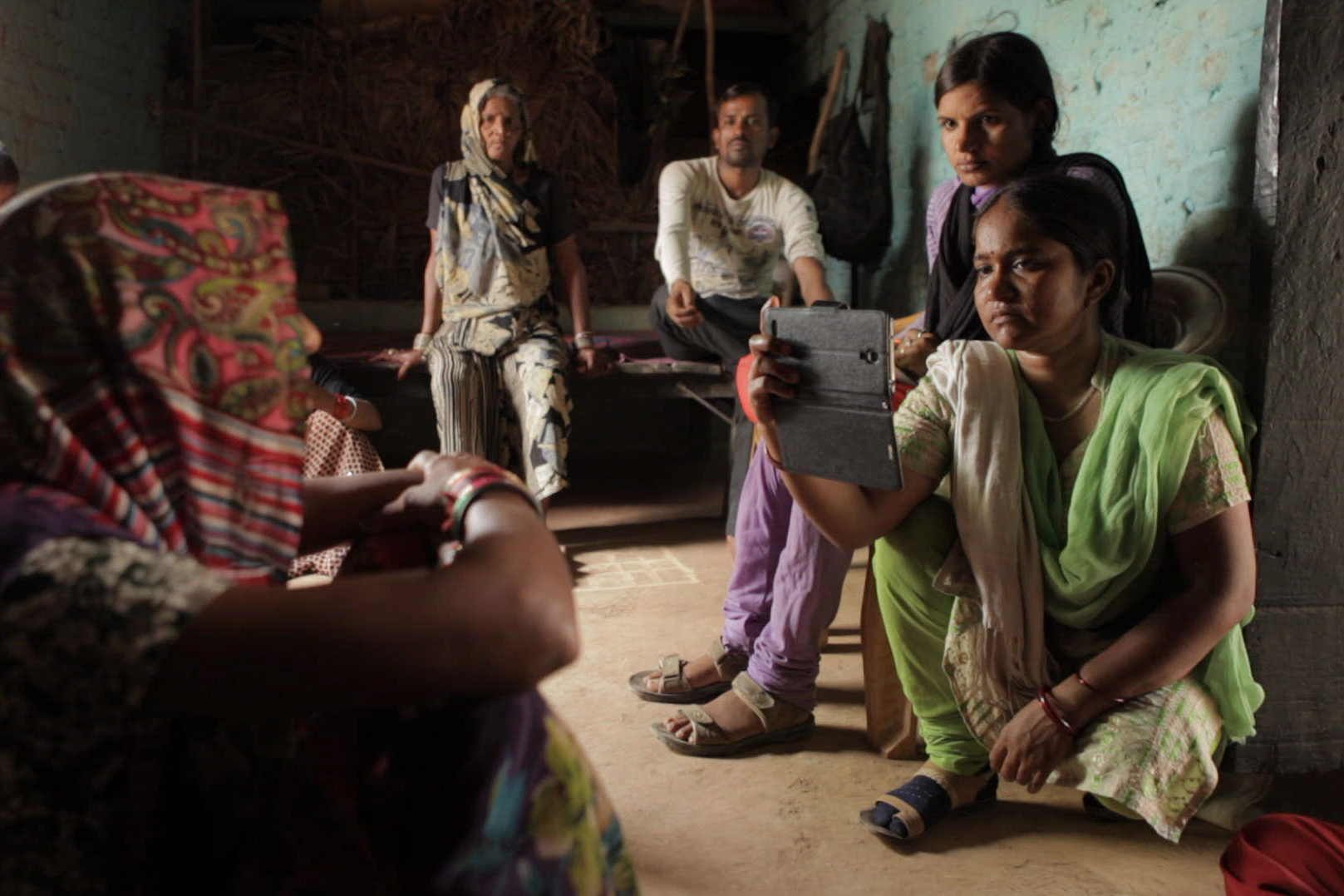 A scene from ‘Writing With Fire’

The film that garnered appreciation across the world, we showed ‘Writing With Fire’ as part of the Weekly Documentary Club to the children from IWB’s Back to School Programme, a social initiative that supports the education of 500 children of daily wage laborers in Jaipur. The programme’s curriculum which is packed with interesting activities and modules throughout the year includes the screening of socially charged movies like ‘Writing with Fire’, which elucidates an inspiring peek into the life of women journalists from rural areas. Also, the icing on the cake was when the two veteran journalists from Khabar Lahariya were invited for an online interactive session with the children. It was more than an hour-long question and answer session that took us through the real-life stories and incidents that both Nazni and Geeta Devi live through every day.

Khabar Lahariya reporters Nazni and Geeta Devi have their own personal tales of redemption and success. Nazni is a senior reporter with Khabar Lahariya with 13 years of experience reporting on local politics, crimes against women, the water crisis in Bundelkhand, and cultural stories across Uttar Pradesh. Her show on YouTube, ‘Bolenge Bulvayenge Hass Ke Sab Keh Jayenge’ tackles systemic social problems and feminist issues. As asked in the session, Nazni described how untoward comments and jokes against women made her think of starting a show which with satirical humor speaks of serious issues. While Geeta Devi is the Chief Reporter at Khabar Lahariya. She has earned great repute through her reportage on environmental issues, climate justice, and migration.

Despite having a decade of reporting behind them today, does their journey seem easy, and had they been supported by family and friends in the very beginning?

Geeta Devi had to go against the wishes of her father when she chose to step out for work and make a living for herself. She was told that journalism was not a field for women. However, she dared to go to work without the knowledge of her father. Her mother proved to be her biggest supporter who finally convinced her family to let her chase her dreams.

Nazni, on the other hand, was the sole breadwinner of the family with five children to look after. She had no degree, money, or sources that could have got her a job. However, she started off with Khabar Lahariya selling the newspaper, until she finally understood the ropes of journalism. She tells her young audience during the session, citing her own example, of how it is important to never lose hope and strive for success, in spite of having few to no backers.

Today, both these women have built an identity for themselves. They are recognized for their work and their contribution to not only their field but also to society at large.

What are the different challenges that they face while reporting? How has rural journalism changed over the years?

As Nazni pointed out, a challenge of our times is trolling and backlashes on social media. However, they have come to take a mature view on this, where instead of blocking trolls, they try to communicate with them. They face their detractors eyeball-to-eyeball and as Geeta Devi said, they had overcome fear once they began to be recognized for their work as journalists.

As for the challenges, while reporting, each had interesting anecdotes and stories to narrate. Nazni wanted to do a story of a woman dacoit named Sadhana. Reports were doing the rounds, but no one had the dacoit’s recent photo or any personal information about her. Nazni dived deep and visited her family to learn more about her. She discovered how Sadhana was exploited by her lover who had sold her to the dacoits. She somehow escaped and was captured once again. It was then that she was declared a dacoit herself and on further investigation, Nazni found that Sadhana had not damaged village property or killed innocent villagers. This brave investigative report throws light on how we often never see and understand the root causes and only lap our way on superfluous information.

Geeta Devi, too, faced many challenges. One incident that she went on to narrate was when while reporting and investigating a blasting site, she was seen by the people around and was asked to leave. She managed to not be intimidated by them and stood her ground. Even after she left the area through another route, she found that she had been followed. She also pointed out that the women journalists did receive threats when working on stories that could potentially expose the powerful.

But journalism is also about pushing for positive change. As a child from ‘Back To School’ asked about the best reports that each of them had done, both the women journalists obliged. 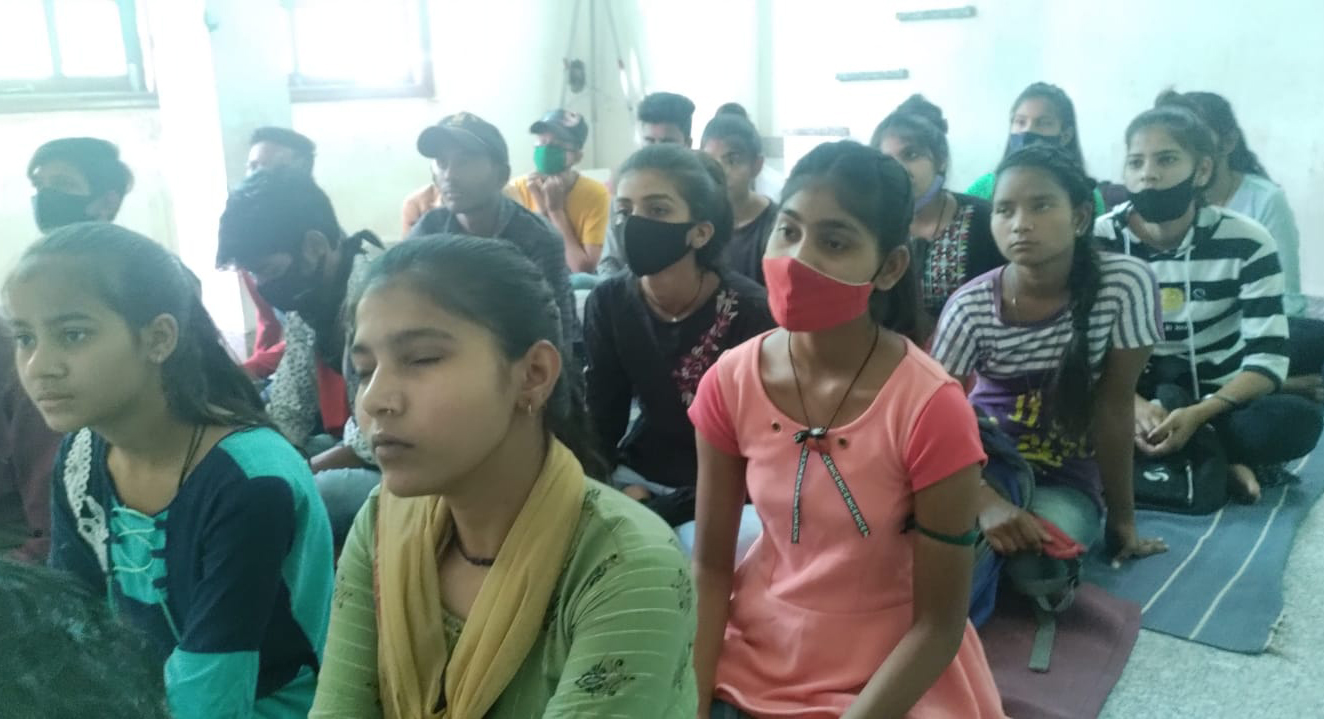 Students of the Back To School Programme

Geeta Devi remembered covering the opening of an Ayurvedic Center in the village. However, there was no operational action at the center. She continued with a humble smile that after writing about it three times for different reasons, finally the center was functioning and working for the benefit of the villagers.

Nazni spoke about a rape case, where the accused had been let off. As time passed, a lot of organizations had also stopped following up. However, Nazni was emotionally attached to the case and could not drop it as she was horrified to imagine that the victim was perhaps the age of her own daughters. After the continuous struggle, she had finally managed to reopen the case and ensure that justice prevailed. Similarly, in another story a kidnapped and trafficked survivor had been reunited with her family after a long ordeal.

Since both were women journalists, a student asked if men too face discrimination while on the job. And both Geeta Devi and Nazni agreed that in some cases men become victims, too. They both acknowledged that wrongdoing is condemnable no matter conducted by which gender.

Finally, the session was a fruitful one that touched upon various topics and discussions. The women hoped that the children might be inspired to be journalists someday, but most importantly reiterated that they could choose to do or be anything in their life as long they believed in themselves and did not lose hope.

The Indian Women Blog team thanks both Geeta Devi and Nazni for the wonderful interactive session that was both inspiring and educative.

A review of my spontaneous spring break

Roe v. Wade is Gone—Now What?

18 Short Books You Can Read in One Weekend